Homeowners Have A Fat Equity Cushion For Real-Estate Downturn 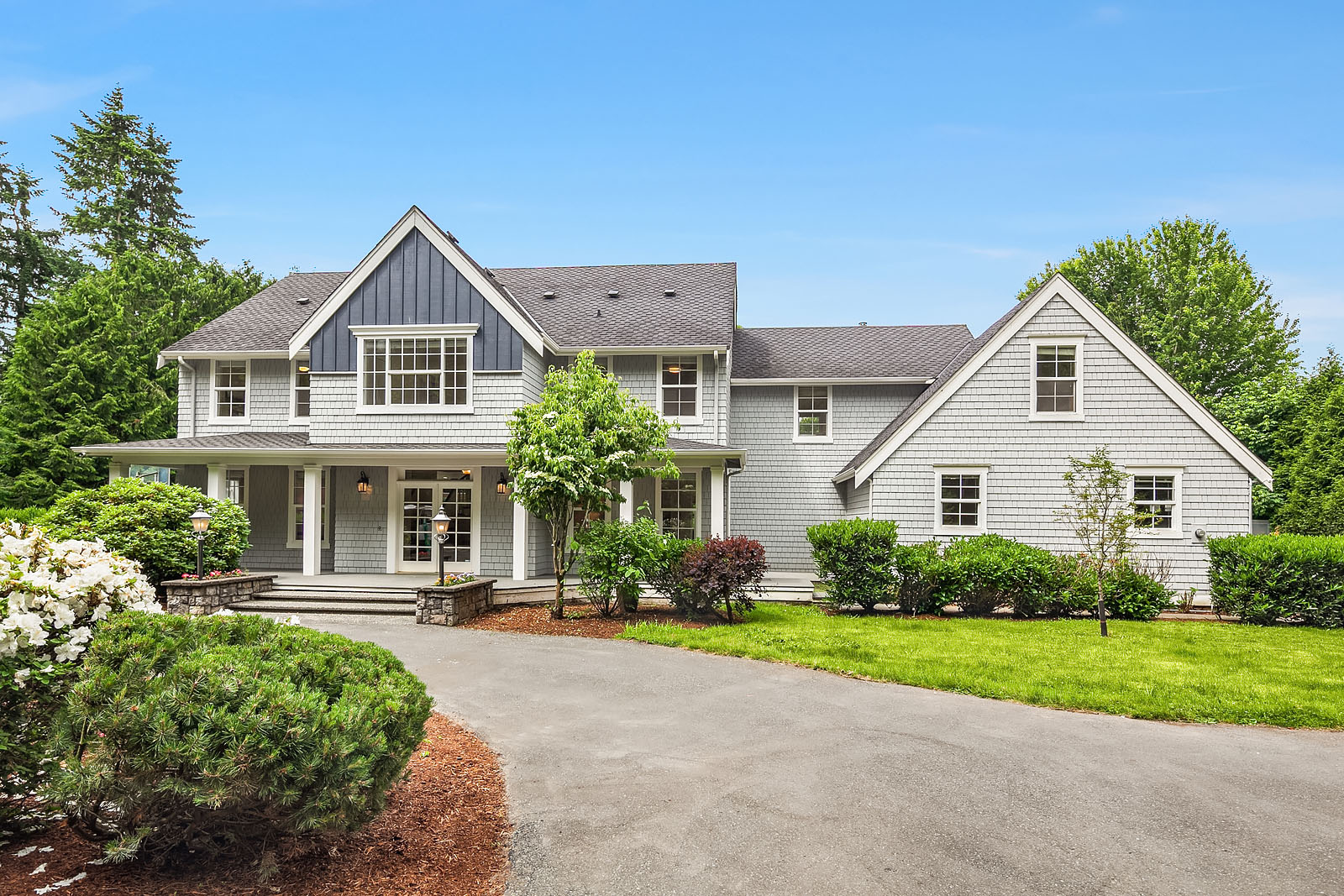 US homeowners continued to build their equity positions last quarter even as the housing market cooled, and they have ample buffers to shield against a deeper downturn, according to a new study.

The share of mortgage borrowers who are “equity-rich” — meaning that they owe no more than half of the property’s market value — increased to 48.5% last quarter, according to a report by Attom, a real estate data firm. The figure was 48.1% in the second quarter of 2022, and 39.5% a year ago.

“Even though home price appreciation has slowed down dramatically in recent months, homeowners have continued to build equity,” said Rick Sharga, executive vice president of market intelligence at Attom.

The pandemic-era housing boom has delivered windfall wealth gains for millions of Americans over the past two years. That’s a potential cushion now that home prices have turned around and are expected to fall further as the Federal Reserve ramps up interest rates. The American Enterprise Institute’s Housing Center predicts a nationwide drop of as much as 15% by the end of next year.

Equity On Tap
It’s also a resource that homeowners can tap for funds if they hit financial trouble in the event of a US recession, which economists say is increasingly likely. The number of home-equity lines of credit, or HELOCs, issued in the second quarter of 2022 rose by 43% from the previous year, according to Attom.

In the housing bubble that preceded the 2008 financial crisis, loose lending standards meant that many borrowers had virtually no equity in their homes. When the market crashed, millions of Americans were forced into foreclosure. But there’s not much risk of a repeat, according to Sharga.

“One of the reasons we don’t believe there will be another huge wave of foreclosures is that the overwhelming majority of financially-distressed homeowners do have positive equity,” he said. “The option of selling the property wasn’t available to distressed borrowers during the Great Recession, when many borrowers were underwater on their loans.” 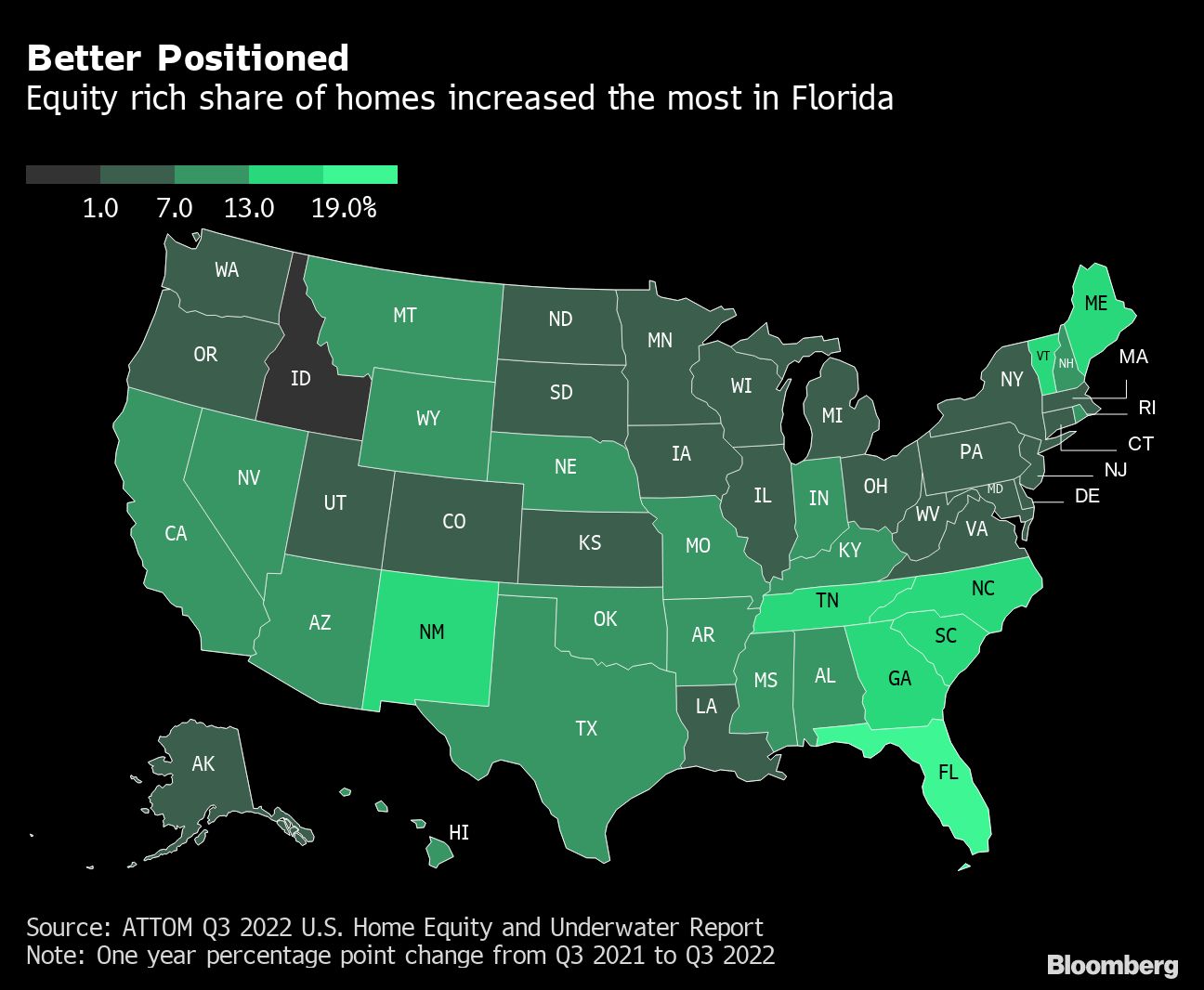 Overall, 94% of homeowners who are paying off mortgages had at least some equity in the third quarter of this year, up from 88% a year earlier, according to Attom. That ratio is even higher when homeowners who’ve fully paid off their mortgages are included.

Out of 58.1 million outstanding mortgages in the US, only about 227,100 homeowners were facing possible foreclosure as of last quarter, Attom estimates. And out of that at-risk group, 92% had at least some equity built up in their homes.

Florida Flourishes
Breaking down the data by region, the biggest increase in the share of equity-rich homes over the past year came in Florida.

Out of the 15 metro areas that scored highest on that measure, 10 of them are in the Sunshine State. Another way of putting it: there are about 5.3 million US homes that were not equity-rich a year ago and now are — and 1.8 million of them are in Florida.

Still, there are pockets of the country — even in relatively prosperous areas — where a large share of homeowners have poor equity positions. Two notable ones are in New York’s Westchester County, which has seen a population influx during the pandemic as residents sought to leave New York City.

In Pleasantville and Croton-on-Hudson, the share of homes that are “seriously underwater” — meaning the borrowers owe at least 25% more than the property’s value — is 45% and 21% respectively, the Attom data show. That compares with 3% for the county overall, and 2.9% nationwide.

In September, Croton-on-Hudson home prices were down 21% from last year, according to real-estate brokerage Redfin.

This article was provided by Alexandre Tanzi, Nov 3, 2022 Bloomberg News.